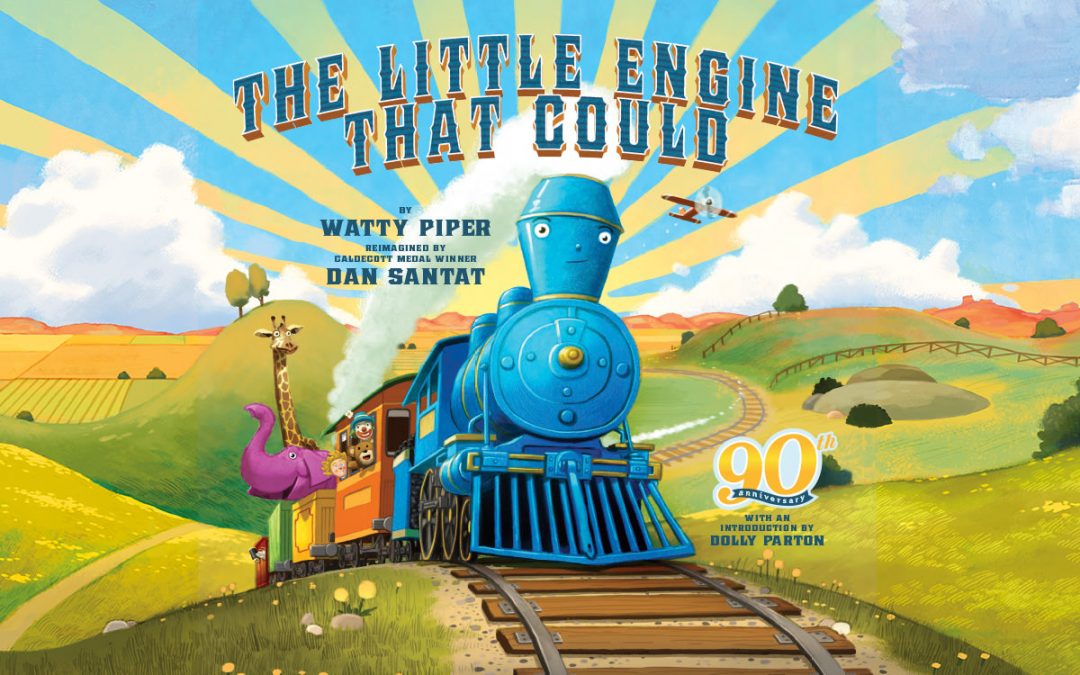 Today, Penguin Young Readers announced the publication of a commemorative 90th Anniversary edition of Watty Piper’s The Little Engine That Could. Scheduled for publication on April 7, 2020, as part of a 90th Anniversary publishing program. The book will feature reimagined illustrations by Caldecott Award-winner Dan Santat, and an introduction by Dolly Parton, award-winning singer-songwriter and founder of Dolly Parton’s Imagination Library.

Dolly Parton recalls the lasting impact of The Little Engine That Could:

“My memories take me way back to a little cabin in East Tennessee. This was not a place where dreams easily came true. Too often, there was talk about all of the things we couldn’t do rather than all of the things we could do. On many occasions, when my dream seemed far away, my Mama would tell me the story of the Little Engine to comfort and encourage me. While I listened to her, I would close my eyes and think of myself as the Little Engine and just start saying over and over again, ‘I think I can. I think I can. I think I can.’ It gave me strength, it gave me hope, and it gave me the courage to keep chasing my dreams.”

“It doesn’t take much to lift a person’s spirits and make us believe that we can all possibly become more than we ever dreamed, and it’s all thanks to a little blue engine.”

“I think I can, I think I can.” These simple words, now ubiquitous, were first uttered 90 years ago by the Little Blue Engine in the children’s classic The Little Engine That Could. One of the most popular and enduring picture books of the last century, The Little Engine That Could has sold more than 20 million copies and inspired millions of children to push their boundaries and challenge their fears. It is the first book every child receives from Dolly Parton’s Imagination Library, which now gifts half a million copies every year. The book has been adapted for film multiple times over the years, including a 3-D adaptation in 2011 featuring the voices of Whoopi Goldberg, Jamie Lee Curtis, Alyson Stoner, and Corbin Bleu. In 2005, Penguin Young Readers published an edition illustrated by Loren Long.

Watty Piper was a pen name of Arnold Munk, an owner of the publishing firm Platt & Munk. Arnold Munk was born in Hungary and, as a child, moved with his family to Chicago. He later moved to New York, where he died in 1957. Arnold Munk used the name Watty Piper as both an author of children’s books and as the editor of many of the books that Platt & Munk published.

Dan Santat is the author and illustrator of the Caldecott Award-winning The Adventures of Beekle: The Unimaginary Friend, as well as the New York Times Best Selling titles Are We There Yet?, After the Fall, and others. He is also the creator of Disney’s animated hit, The Replacements. Dan lives in Southern California with his wife, two kids, and a menagerie of pets. Visit him at dantat.com.

Since the beginning of Dolly Parton’s Imagination Library, Penguin Random House has been a valued partner with The Dollywood Foundation and all champions of the program throughout America by ensuring the availability and affordability of millions of books each and every year. Penguin Random House, the world’s largest trade book publisher, is dedicated to its mission of nourishing a universal passion for reading by connecting authors and their writing with readers everywhere. The company, which employs more than 10,000 people globally, was formed on July 1, 2013, by Bertelsmann and Pearson, who own 75 percent and 25 percent, respectively. With nearly 275 independent imprints and brands on five continents, Penguin Random House comprises adult and children’s fiction and nonfiction print and digital English- and Spanish-language trade book publishing businesses in more than 20 countries worldwide. With over 15,000 new titles, and close to 800 million print, audio and eBooks sold annually, Penguin Random House’s publishing lists include more than 80 Nobel Prize laureates and hundreds of the world’s most widely read authors.