Dolly Parton’s Imagination Library of United Kingdom is a free book gifting programme devoted to inspiring a love of reading in the hearts of children everywhere. Each month, enrolled children receive a high quality, age appropriate book in the post, free of charge. Children receive books from birth to age five.

In December of 2007, Dolly Parton traveled to London, England for a special announcement about her Imagination Library. To celebrate the programme’s launch in the United Kingdom, a group of school children gathered on the steps of the Savoy Hotel to sing Dolly’s song “I Believe in You.” The Imagination Library’s coverage in the UK includes England, Northern Ireland and Scotland.

Book selections in the UK include popular characters such as Peppa Pig and beloved authors and illustrators including Lynley Dodd.

Each month, Dolly Parton’s Imagination Library mails a high quality, age appropriate book to all registered children, addressed to them, at no cost to the child’s family. Countless parents have shared how excited their child is when their new book arrives each month. Many groups and individuals work hard behind the scenes to make that special moment possible for each child.

The Imagination Library provides the infrastructure of the core program including managing the secure central database for the Book Order System and coordinating book selections and wholesale purchasing. It also incurs the cost of the program’s administrative expenses and coordinates the monthly mailings. 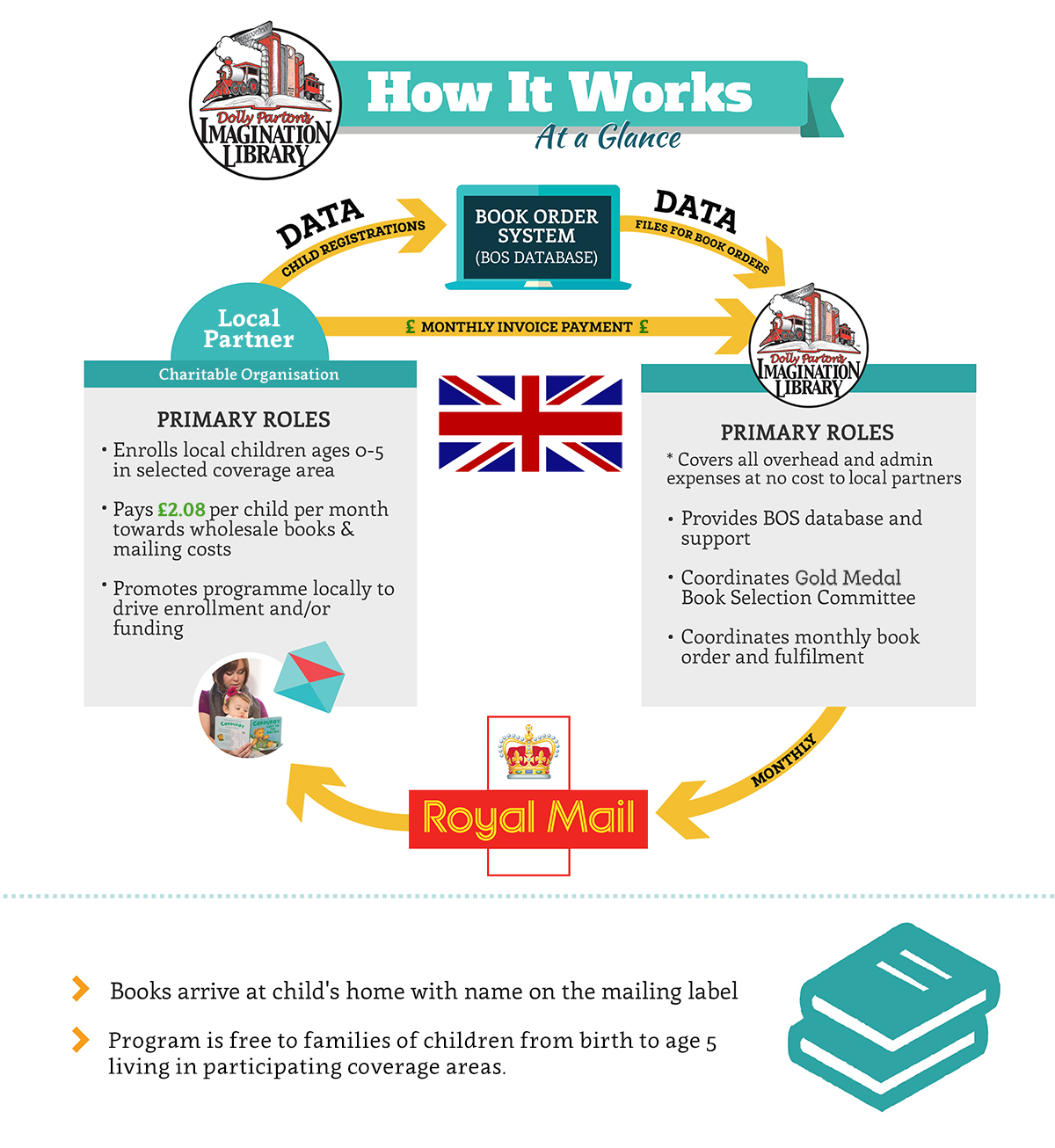 Local Champions are responsible for enrolling children who live within the geographical area they offered the program in. They promote their local programs online and at events. While the Imagination Library negotiates wholesale pricing for the books, Local Champions are responsible for securing funds to cover that cost. Books are 100% free to enrolled children because their Local Champion has secured funds to cover the cost of the books and the shipping fees.

I’m interested in starting a program for children in my community.

The Imagination Library isn’t currently supported in my community. What do I need to consider to get started?

How much funding do I need?

Where do I find a non-profit partner?

Step 2: Putting the pieces in place.

1. Contact the DWF Regional Director that covers your area

Key roles you should consider:

You may now enter registrations into the BOS. Email us to switch to Operating status when you are ready to begin accepting online registrations and start mailing books!

Think about planning a launch event to build awareness and excitement