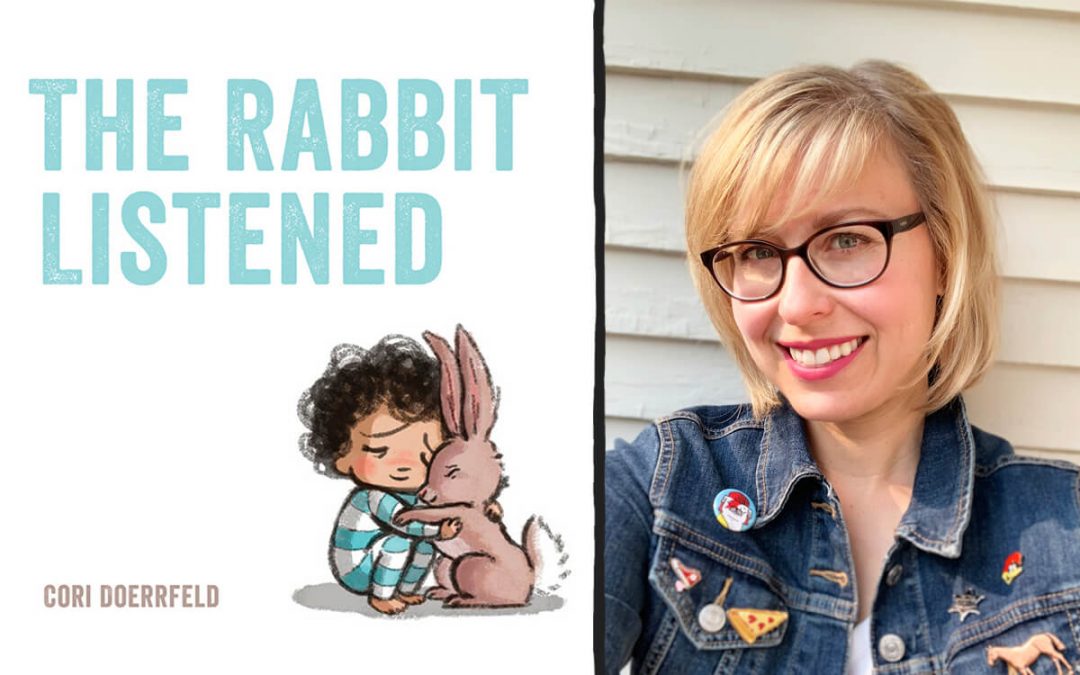 Cori Doerrfeld shares how “The Rabbit Listened”, one of the many great titles in Dolly Parton’s Imagination Library lineup for 2019, has resonated with a global audience.

Each year, our esteemed Blue Ribbon Book Selection Committee reviews hundreds of potential titles for inclusion in Dolly Parton’s Imagination Library, taking great care in choosing books that meet the different needs of children as they progress from birth to age five. “The Rabbit Listened”, by Cori Doerrfeld, was one of the titles chosen to be sent to Group 4 (children born in 2016) in the USA and Canada.

Immediately upon mailing, we started receiving an overwhelming amount of positive feedback on how this story has resonated with children, parents and caregivers. Praised by readers and critics alike, “The Rabbit Listened” was named a Notable Children’s Book of 2018 by The New York Times and has won numerous awards, including the Anna Dewdney Read-Together Award for 2019.

We enjoyed talking with author Cori Doerrfeld as she shared her thoughts on the Imagination Library, her inspirations for the book and much more in an in-depth interview.

Q. From where did you get your inspiration for “The Rabbit Listened”?

A. About four years ago, I had two very close friends go through the experience of losing a child. They were very frustrated with their family and friends, because nobody really knew what to say or do. And as much as I tried to be there for them, I also felt very helpless. What do you do when someone is dealing with something so inconceivable?

It reminded me of a letter I received way back in college from my boyfriend at the time, describing what it was like for him after losing his older brother in a car accident. He said that everyone tried to find ways to make him feel better, but it was all very overwhelming. His family had a hobby farm with all of these little rabbits in the barn, and he would just sit there alone, with no one else but these rabbits. He said that’s really what helped him finally process the grief of losing his brother. Rabbits are just naturally quiet and peaceful animals.

So, I went on a long walk with my dog, thinking about my friends and thinking about this letter, and the story for The Rabbit Listened just came to me. It’s almost hard to explain. I remember I ran home, wrote it down and drew rough little sketches, all in a day.

Q. Did you expect this story to resonate with so many people? What kind of feedback have you received from the readers?

A. No, really I didn’t have any idea. I purposely made the character very neutral and very accessible to anyone who reads it. I picked a gender-neutral name and tried to make the character look as neutral as possible, but I didn’t know that the book would actually be translated into so many languages. I think it’s in over 18 languages all over the world! What’s interesting is, I hadn’t thought about it, but the character really could be anyone from anywhere in the world.

A lot of people say that the book finds them. They didn’t even know they were looking for it and someone sends it to them, or they find it in a bookstore or library.

I’ve gotten a lot of stories from people who have experienced loss, but I’ve also gotten lots of inspiring stories, too. The book has been used to help incarcerated parents, who will use it to connect with their children. It’s been used after natural disasters, like a hurricane or flood.

It’s strange to say, but I didn’t necessarily think about how it could apply to any kind of situation, no matter how big or small it is. People do, really, put their own selves into the book right away and whatever situation or loss they’re dealing with.

Rough Sketch from "The Rabbit Listened"

Sketch from "The Rabbit Listened"

Rough Sketch from "The Rabbit Listened"

Sketch from "The Rabbit Listened"

Q. In the book, each of the animals tries to comfort Taylor in a different way. Are you, yourself, more of a listener like the rabbit, or are you more talkative like the other animals?

A. I feel like I’m a good rabbit, but I also very much relate to the ostrich. I sometimes really want to hide, especially when things are difficult. Sometimes I have a hard time with comforting and really knowing what to say, but I guess that’s why I’m a good rabbit, I do know how to listen. My Mom has always been a good listener to me, so I feel kind of like I inherited it. I’ve noticed that she has a lot of friends who’ve gone through a lot, and everyone seems to turn to her.

Q. How did you find out that your book was selected for Dolly Parton’s Imagination Library? Had you heard of the program before, and what are your thoughts on being a part of it now?

A. It’s actually a funny story! I don’t have the program where I live, but my sister does, and she would always tell me about the Imagination Library and how great it is. One day, she looked and saw that my publisher partners with the Imagination Library, so she told me that she was going to write a letter suggesting that my book be a part of the program. I don’t think it was too long afterwards that I got an email saying that I had been chosen. I know that’s probably not the reason why, but it’s okay, I’ll let her take the credit!

I was sitting on the porch with some of my close friends when I got the email, and they were all very excited about the program and Dolly’s involvement. Once I realized the magnitude of the program and how many people the book would reach, it was amazing just to know that all of these people would receive a book that could potentially help them or help their parents. It’s a phenomenal organization and it’s just incredible to be a part of.

Q. Have you always wanted to be an author and illustrator?

A. As a child, what I really wanted to do was grow up and be an animator. I love old Warner Brothers cartoons and the old Disney movies. I used to spend hours drawing cartoon characters, and loved how it seemed like magic that they would move once they were on film. Hand-drawn animation became less popular by the time I went to college, however, so I didn’t really know what I was going to do.

Right out of college I was a teacher at a preschool and I was a nanny, so I read lots of children’s books. I remember thinking, “I wonder if I could do this?”, so I began writing books just for fun. My husband, who works at an art college, helped me print them and we would take them to comic conventions around the country. At one of these conventions, an editor from HarperCollins happened to pick them up, and that led to me auditioning to illustrate a book by a celebrity. I won the audition, and the rest has been history!

Q. Who were some of the biggest influences on your work as an illustrator?

A. I like Chuck Jones, Bill Pete, and Mary Blair, people from the animation world. The more I become immersed in the world of illustration I can definitely look back and see influences from people like Margaret Bloy Graham, who illustrated “Harry the Dirty Dog”. Richard Scarry, Christian Robinson. I’m so impressed by the talent that’s out there. Margaret Bloy Graham especially comes to mind. Her illustrations are a great example of how you can make something expressive and keep the emotion when you’re just mostly using lines and minimal color.

Q. Did you read a lot when you were growing up? What were some of your favorite children’s books?

Yes, my Dad was actually the one who read to me every night. I don’t know how we got it, but my very first book when I was very little was “Barbapapa”, which is a European cartoon character. I remember loving this story, about a little pink blob who grows

bigger and bigger under the house, and then pops out and becomes friends with a little boy. It’s all about how he doesn’t quite fit into the world. I loved that book, maybe just because it was so different, and I actually have a framed print of an illustration from it in my house.

As soon as I could read on my own I loved reading the Ramona books, anything by Beverly Cleary. Classics like “The Secret Garden”, “A Little Princess”, I would read books like that over and over again.

Q. How do you share your love of books with your own children? 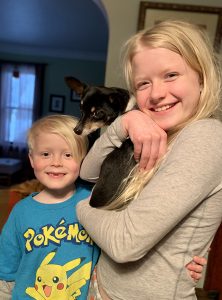 A. What’s cool about my children being older now is that we can read the same books and share them with each other. When they were little, it was fun to read them all of the books that I really liked. I still have some of those original ones from when I was a child, so that’s been really fun.

My children both also draw and write, so it makes me feel very proud that the desire to create has trickled through them, whether it’s genetic or just from the fact that we have always read together.

Q. What has been the most rewarding aspect of being a children’s author?

A. I would have to say that it’s how many people I’ve gotten to connect with, people I never thought I would get to meet or even kids at schools I’ve visited. I’ve gotten to go to schools all over the place and see how excited kids get when you read to them. It’s fun because we’ll do the animal noises together, so we’ll all make chicken noises and bear noises. It’s really nice to have a book like “The Rabbit Listened” that makes people want to reach out to me and makes me feel more connected to everyone in general. It’s amazing to know that even if there’s just one person out there who really needed the book, I’ve created something that could help.